Even though she is only in her second semester of college, freshman Rachael Hillyer is already making a name for herself across campus. In addition to playing on Mizzou’s club soccer team and joining Pi Phi Sorority, she is the Sinclair School of Nursing’s first Discovery Fellow.

The Discovery Fellows Program allows eligible freshmen to participate in mentored research in their academic area. While in high school in St. Louis, Hillyer began discovering her passion for genetics research. The Cor Jesus Academy graduate had the opportunity as a high school student to participate in research on plant mutations with the Donald Danforth Plant Science Center.

But she also knew she wanted to interact with people. As the daughter of a nurse, Hillyer had initially rejected the idea of becoming a nurse herself. However, while shadowing a pharmacist at a local hospital, she found herself drawn to the nurses and the work they did with patients.

“I started to realize I really liked patient interaction,” she says. “I kept looking away to see what the nurses were doing.”

After being accepted into the Discovery Fellows Program, Hillyer was appointed to work with Professor of Nursing Jane Armer, PhD, RN, FAAN. Recently inducted into the International Nurse Researcher Hall of Fame, Armer is well-known for her research on lymphedema, and Hillyer cannot believe she gets the opportunity to work so closely with her.

“She is the smartest person I’ve ever met,” Hillyer says. “I’m learning so much from the research I’m doing, but I’m learning even more just from being near Dr. Armer.”

Throughout her first semester, Hillyer acclimated herself to Armer’s research and is now becoming a more active researcher. This semester, she is attending breast cancer support groups to talk with participants about lymphedema, transcribing interviews and creating a poster for World Lymphedema Day on March 6.

Armer has been impressed with Hillyer’s work and sees a bright future for her.

“Rachel is bright, curious and eager to learn about nursing and research,” she says. “It is a pleasure to work together, as her eagerness to explore new areas brings renewed energy to our research. The future is so bright for Rachel as she combines her passion for genetics and her love of working with people through the profession of nursing.”

Despite being only 18, Hillyer has big plans for the future. Later in her college career, she hopes to conduct research on how genetics impact lymphedema. As for after graduation, Hillyer sees herself serving patients as a bedside nurse.

“Eventually, I see myself doing more research because I love the independence it brings and I love discovering new things,” she says.

And while at first she didn’t want to leave high school, Hillyer now feels at home and is certain she made the right college choice.

“I love the big school atmosphere, but at the same time, the nursing school makes the campus seem a lot smaller because of the family atmosphere,” she says. “Mizzou is a really good place for me. I don’t think I would have opportunities like this elsewhere.”

Accelerated BSN students India Bloom and Jayde Sharp and PhD student Laura Remy were recently selected to participate in the Deaton Scholar Program (DSP) with the Deaton Institute for University Leadership in International Development. As a scholar, they will receive peer-to-peer guidance throughout the spring 2018 semester from selected mentors to improve academic motivation, professional development and community involvement – as per their selected thematic interests. Congratulations, India, Jayde and Laura!

The Sinclair School of Nursing and the MU Nursing Alumni Association cordially invite you to attend our upcoming events:

You can learn more about the program here. 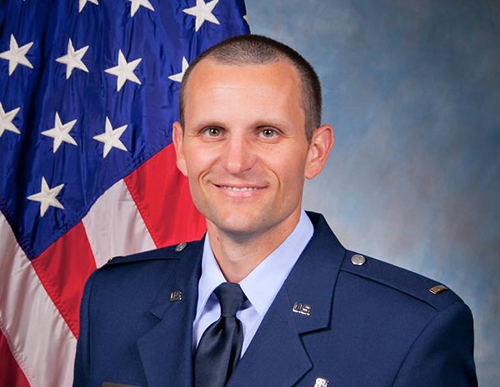 An active duty military officer, father of six and doctoral student in MU’s Sinclair School of Nursing, John Rossi is the walking definition of balance. Not only does he serve as a full-time military nurse, but he’s also an incredibly involved parent, sharing homeschooling duties with his wife, Nancy, for five of their six kids. Although some days can feel more chaotic than others, John has been a hard worker and goal setter for his entire adult life. So when he set his sights on finding a highly ranked graduate nursing program that would fit into his busy life, MU’s SSON climbed to the top of his list.